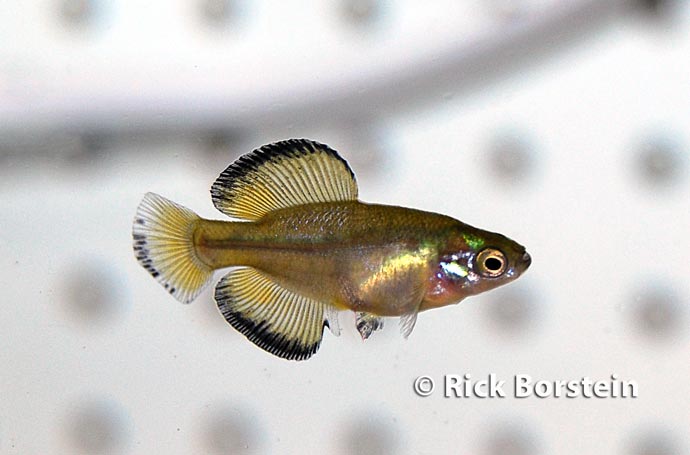 Females are drab by comparison. They have a somewhat washed out golden base color and few if any markings.

This fish is found in quiet, cool and slow moving waters and ditches in the Michoacan and Morelos. Watersheds where this fish are found are typically very shallow and contain many aquatic plants.

Girardinichthys multiradiatus "Maravatio, Mexico" is not hard to keep provided the aquarist provides clean, cool, neutral to hard water. Temperatures above 72F are detrimental to the health of this fish. Kept at tropical temperatures, it will become listless, stop breeding and may expire. The solution is simple; don't add a heater and keep it in a cool part of the house.

So, why does this fish need to be kept cool? One location where this fish is found (Lagunas de Zempoala) is at 2800M altitude. Average water temperatures there are 53-64F! I believe this fish evolved to handle cool temperatures.

I performed weekly water changes replacing the tank water with new water that was no more than 72F.

I am not aware of any stomach contents analysis for Girardinichthys multiradiatus . My guess is that it is omnivorous in the wild, pecking and algae and eating any small aquatic fauna it may encounter.

I obtained five young Girardinichthys multiradiatus "Maravatio, Mexico" at the April, 2012 meeting of the Greenwater Aquarium Society (Chicago). Steve Liszt had bred the fish and was offering both the adults and the fry for sale. He had obtained his fish from Pat Hartmann of Detroit, MI. I paid $10 for a bag of five, one inch fry. I took the fish home and placed them in a 10-gallon tank furnished with a sand substrate, java moss and small sponge filter. I also used some floating plastic plant mats.

No heater was used on the tank and water temperatures ranged from around 67F to 72F. The fish grew quickly and by the time the fish were 1.25" long it was possible to distinguish the sexes. Males give very mild chase to other males when sexually mature. Overall, this is a very peaceful fish.

The babies hid in the floating plastic plants for a week or two before joining their parents in the tank. The parents ignore the babies in the tank, so fry survivability is good. The babies are able to immediately eat finely crushed flake food, but I also feed freshly hatched baby brine shrimp the first few days.

Girardinichthys multiradiatus "Maravatio, Mexico" is a beautiful goodeid that is fun to keep. Other than the challenge of keeping this fish cool, it isn't very difficult and its unique shape and gentle nature should put this fish on your "to do" list. 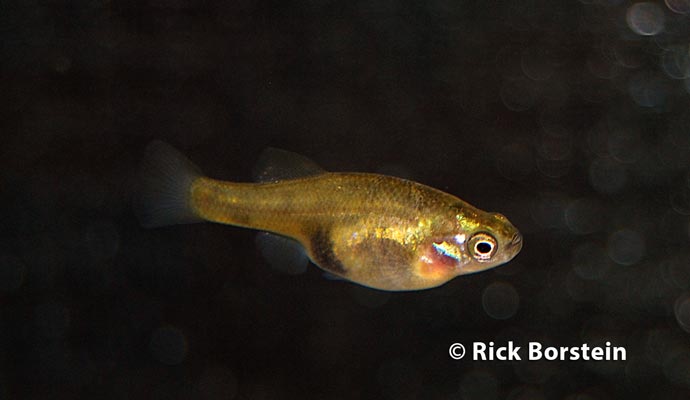