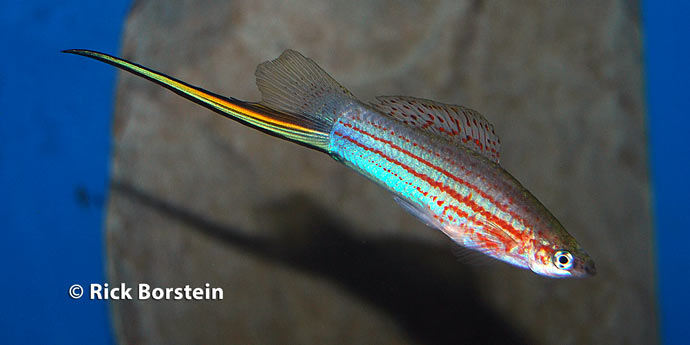 Xiphophorus mayae is a livebearing poecilid found in Honduras and Guatemala. The Xiphophorus genus is composed of 26 described members of platyfish and swordtails.

Xiphophorus mayae is a member of the X. helleri (Southern lineage) clade along with X. helleri, X. Xiphophorus alvarezi and X. signum. There is some disagreement how useful the lineages and clades are since genetic analysis doesn't fully back this up.

However, to me as a hobbyist, it certainly looks a lot like other members of the helleri clade, like a deeper bodied and larger version of X. alvarezi in color with a lot of orange highlights. Males, in the right light, have a lovely metallic teal background with bright orange stripes down the flanks. The sword is yellow-green with a contrasting black edge. Overall, Xiphophorus mayae is a very colorful sword which might easily be mistaken for a sword which had been line bred for color.

Xiphophorus mayae is found in Guatemala and Hounduras in slower moving, rocky boulder-strewn rivers which often have significant amounts of plants present such as Vallisneria.

Ken Davis of Atlanta, GA was one of the aquarists who found this fish during a collecting trip. Ken shared the following:

All the ones in the hobby come from one little pool you can almost step across at the bottom on a small mountian, a little run off stream makes the pool and then runs about 20 yards into the Rio Belaire, don't really find them in the main river, too many pedators. Jeff Rapps found the pool orginally on the Honduras trip he went on and I have collected in it four times since then.

Xiphophorus mayae is easy to keep, but this large-growing fish requires a large tank. We recommend a 36-inch or longer tank such as a 40 breeder. Swords do well in neutral to hard water between 70 and 77F, but can handle cooler temperatures if necessary. Weekly partial water changes are recommended.

I obtained a group of eight juvenile Xiphophorus mayae from Greg Sage of Select Aquatics at the April 2012 ALA Convention in Fort Lauderdale, FL. I placed the group into a 50G flat tank measuring 36 X 18 X 22. Filtration was provided by a 6-inch Swiss Tropicals Poret Foam Filter and the tank temperature was maintained at 74F. Tankmates included a pair of West African cichlids (Enigmatochromis lucanusi) and an odd Characodon left over from a previous breeding set-up. My fishroom is set up for automatic water changes and this tank probably changed over 75% of the volume each week.

The Xiphophorus mayae grew steadily and my group turned out to be five males and three females. By January 2013, I noticed the first fry swimming in the tank. Oddly, female Xiphophorus mayae do not appear very pregnant. Unlike other poecilids, they do not always swell noticeably nor do they "square off" in the front. Despite a cover of floating plastic plants, I lost most of this first batch to predation, most likely from the cichlids.

In April 2013, I again found fry and I was able to net out ten young fry to a separate five gallon tank for grow out. At one month of age, the largest of the fry are almost 3/4-inch long. Most reports I've read detail that females drop 20-40 fry, but the most I saw was about sixteen.

I passed on the adults to fellow CLS member Steve List who I hope will continue to breed these fish and distribute them in the hobby.

Xiphophorus mayae is a larger, robust colorful wild-type sword that should be more popular. If you like swordtails, this is a fish you should locate and keep. 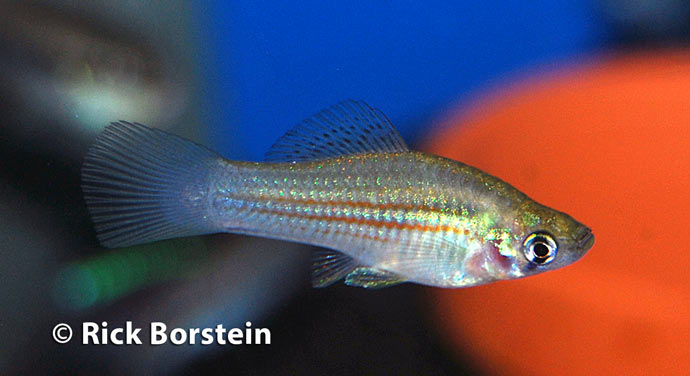